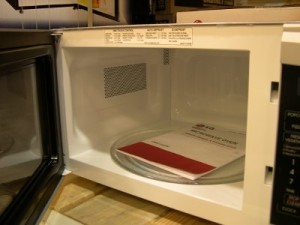 Recently, I’ve seen a spate of claims on Facebook by people posting what are supposed to be “facts” that microwave ovens are unsafe for cooking food in.  In addition, a major food website that is supposed to be reputable has even published an article which not only questions the safety of microwave ovens, but even goes so far as to insist that they are unsafe and that you should not use a microwave oven to cook any food.

Are these claims true, or are they the stuff of urban legends and meant to scare people?  While I don’t really like to cook entire meals in a microwave oven, it is certainly a useful and efficient appliance in my kitchen and I use it for a variety of things, including thawing frozen food, heating milk to later make yogurt, and sometimes, making a “baked” potato.  So am I harming myself by using a microwave?

Let’s look at some of the claims that recently appeared in the article on the reputable website about microwave safety:

It is claimed that “microwave preparations lack healthy nutrients as most of them are destroyed during heating.”

Whoever wrote this has no clue about microwaves. Microwaves are not “radiations” in the sense that we often hear about, as in radioactive radiation – but are electromagnetic in nature.  Not only are they used in cooking food, but microwaves are also used in communications as radio frequencies, radar, and navigation. There is no “radiation” that gets into the food.

While it is possible that nutrients may be damaged or destroyed when heating food with a microwave oven, this is true of any method of heating food. Cook your broccoli in boiling water, and you are going to destroy or reduce the amount of nutrients like Vitamin C that is in the raw pre-cooked broccoli. There is nothing unique to microwaves as far as this is concerned. Indeed, heating foods in any manner can change the molecular structure. As I pointed out, I use a microwave to heat milk before making into yogurt as I want to alter the protein structure of the milk. I can do this by microwaving the milk until it reaches a temperature of over 180F, or I can do this by putting the milk in a pot and heating it on the stove until it reaches a temperature of 180F. The result is the same.

It is claimed that microwave ovens are unsuitable for preparing baby food and heating up milk for baby. The reason given is that “High milk temperature (often resulted due to overheating) could not only burn a baby’s mouth and throat, the steam all encapsulated in the bottle may also cause the bottle to explode due to the presence of radiation gases within it,” as well as a claim that “radiation gases” could cause a milk bottle to explode.

It is true that microwaves are not recommended for heating baby food and milk for babies, but this has nothing to do with “radiation gases” (which do not exist in microwaved food or milk) or because of diminished nutrients. It is because there is a danger that the food or milk may cook or heat up unevenly leaving some or all of it very hot – much too hot for a baby to consume.

Milk and baby food given to a baby should be warmed, not heated to a high temperature. While there is also the danger of heating milk and baby food to a temperature that is too high using other methods, it is easier to control than with a microwave. In addition, it probably is best to only warm baby food and not cook it so that they do remain nutrient dense. You will destroy nutrients by over cooking baby food in a pot on the stove. It is heat that is the problem; not microwaves themselves.

3. Claim: Microwaves Can Destroy Your Blood

The author of the article references an incident in Oklahoma, when a nurse apparently put blood in a microwave before it was used to give a patient a blood transfusion. After receiving the blood that had been microwaved, the patient died of a blood clot. The claim that is made is that “It was found that microwaves injected some kind of destructive substances in our blood when we heat it.”

This is utter nonsense. There are no “destructive substances” injected. Indeed, if the author of the article had done any research, they would have quite easily have discovered the case in question as well as the Civil Courts Appeal Case which you may read here:  http://wyomcases.courts.state.wy.us/applications/oscn/DeliverDocument.asp?citeID=4387

In the footnotes of the Case, it states, “Heating blood in this manner destroys the red blood cells, resulting in “gross hemolysis” of the blood, releasing large amounts of potassium. Excessive potassium, when introduced into the body, is …often fatal.”

Heating blood to a high degree destroys red blood cells, no matter what. That’s why when you leave a steak on the barbque, well done is well… no pink or red
in it.

It was not the microwaves themselves, it was the heat – and the hospital HAD blood warmers made specifically for warming up blood correctly and to the
correct temperature, which was not used because the anesthesiologist wanted to warm the blood faster.

There is NO evidence of anything else happening, other than red blood cells were destroyed in the blood that was given as a transfusion. Due to it not being
warmed properly. Warming blood in boiling hot water is not an accepted practice… but it would be silly to say that “heating blood meant for a transusion in boiling water does something bad to blood, so don’t eat the food heated in boiling water.”

The article in question suggests that The Soviet Union banned microwave ovens in 1976.

This is a difficult claim to verify – there is debate on whether or not the USSR actually banned microwave ovens.  One would probably have to be a Russian speaker and try to find documentation to support this claim, but if it indeed is true, it was for only a very short time. If it is true, it was likely more out of over-zealousness in regard to safety, for indeed, microwave ovens have been readily available in the USSR for decades.  In other words, the former Soviet Union, if indeed it banned microwaves, overturned any ban rather quickly.

To support this claim, the author of the aforementioned article describe a study (without linking to it) done by Raum & Zelt in 1992. The study had a sum total of 8 participants, and the claim is that there were noticeable “changes in the human build” after consuming microwaved food.

Any study involving only 8 participants is not going to pass scientific muster whatsoever.  Using only 8 participants for this kind of study wouldn’t even pass a High School Science Fair, let alone be taken seriously as a well thought out scientific experiment.  There are far too many variables that have not been accounted for that could affect any number of things in human chemistry, to make any specific claims about microwaved food.

Indeed, there appears to be no peer reviewed study published by Raum & Zelt.

So Are Microwave Ovens Safe?

Yes. They have been in wide household use in the USA since the 1960’s. They are constructed in a safe manner which practically eliminates microwaves from traveling outside the oven. There is no radioactive radiation from microwaves. They do not change the structure of food any differently than other heating methods that would be more harmful.

In fact, according to one study that was published in a peer reviewed journal, Meat Science, various heating methods were used on the LD muscle of a camel. According to the study, “Results obtained from scanning electron microscopy (SEM) showed more damage from roasting than in either braising or microwave heating.” (Source)

So go ahead and use your microwave. It’s more efficient for heating up foods than using a large oven or stove top burner.  I personally like to cook meals in cast iron; that is my preference and I think the food tastes better – but that is my own subjective opinion.  And worrying about food safety cooked in a microwave is the least of my worries; indeed I don’t even give it a thought!