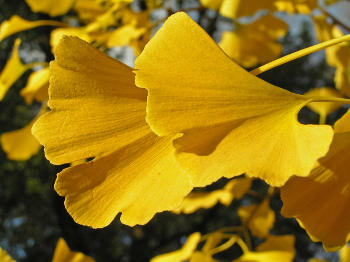 The Ginkgo biloba tree grows primarily in China and can grow very tall with some trees being measured at over 150 feet high. It is a unique tree that due to the fact that it has no known relatives and the species has survived for millions of years.  Fossil records show that it once grew throughout the world, but today the  majority of gingko trees are in China with some cultivations in North America, Japan and Korea.

It is an important tree in the Buddhist beliefs; because of their longevity, they are revered.  For this reason, Ginkgo trees were planted and tended by Buddhist monks. Today, as well as historically, the seeds or nuts of the tree are eaten as food while the leaves are considered to have medicinal properties. Science is studying the leaves and are finding some very interesting results in their studies.

In Japan, it is a very popular species for bonsai art. The ginkgo leaf is frequently used as an emblem in family crests which appear on swords, the walls of castles and shrines, and other visible places.

How It Is Used:

As mentioned, both the leaves and the nuts of the ginkgo biloba tree are  used; the nuts primarily as a food and the leaves for the medicinal qualities. In Japan, the nuts are also seen to have some medicinal characteristics in the aid of digestion. They are eaten roasted or boiled and are often on the side along with drinking Sake.

It is the leaves however that seem to have the most to offer in regard to healing and illness prevention.  The extract of the ginkgo leaves contain glycosides and terpene lactones. Studies have shown that the extract is beneficial for the circulation and may be helpful for conditions such as Raynaud’s Disease. Because of helping to improve blood flow, this may be one of the reasons why it also appears to help with concentration, memory and cognitive abilities. Also, it may be helpful in the treatment of some erectile dysfunction by assisting with blood flow.

In 2010, a study was published in the International Journal of Geriatric Psychology which showed that 240 mg per day of the extract of ginkgo biloba was helpful in treating dementia in humans. This followed previous studies in mice which showed promising results in an increase of cognitive function.

Ginkgo has been found safe generally speaking, however those that are on blood thinners should not use it or supplement with it without the advice and knowledge of their medical doctor. As well, there appear to be some people who are allergic to the extract and those who are allergic to cashews may be more vulnerable to this. In addition, there is strong evidence that ginkgo is an antioxidant and is helpful in maintaining overall health and general illness protection.

On the other hand, it does show promising results to help improve memory, concentration, blood flow and cognitive abilities in those to take ginkgo on a daily basis.