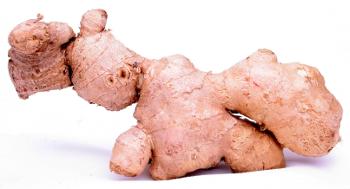 Ah, ginger – that spice that is used in so many different ways and enjoyed by almost everyone. So much did England’s Queen Elizabeth I enjoy this aromatic spice with the distinctive taste that she is given credit for the invention of the original “Gingerbread Man.”  Ginger certainly has a long history as a spice both used for it’s taste as well as medicinal qualities.

It’s distinctive taste is desired in both sweets, deserts and main courses of meals, and in India, is part of the regular flavorings for many main dishes.  In Europe and North America, it is quite often used in making cookies, biscuits, candies and other sweets. And let’s not forget about the several different beverages that have ginger as their primary taste ingredient.  It has quite likely been cultivated for up to 5,000 years and definitely for more than three thousand in the east, including China and India.

Today, most of the world’s supply comes from Jamaica although it continues to be grown and cultivated in India, China and other climates that are suitable for its growth.  The ginger plant grows to a height of between three and four feet and has leaves between six and twelve inches long. The part that is used for  medicinal, cooking, and baking uses is the rhizome, stripped of its roots.

Another perennial plant cultivated mainly in China and which has a rhizome similar in appearance, scent and taste to ginger is the Galangal (Alpinia galanga) plant.  Also known as “Catarrh root,” this plant in the middle ages was used in similar ways to ginger and had special fondness for being considered an effective aphrodisiac.

In addition to its use as an aphrodisiac (In Italy, the University of Salerno recommended regular use of ginger to couples for a “long, happy marriage”), historically it has been used to treat a wide range of illnesses and conditions. These include nausea, sore throats and colds, rheumatism and motion sickness.  In China, it was used thousands of years ago and was recognized by sailors as an effective guard against seasickness as well as scurvy. Much later, the British Navy also made sure of adequate stocks of ginger aboard sailing ships as an aid to prevent scurvy among their own naval personnel while at sea for long periods of time.

So how does tradition hold up against scientific studies done on this spice, today?

A study published in The Lancet in 1982 showed that ginger had remarkable healing qualities and was shown to be significantly better at minimizing motion sickness than pharmaceutical drugs. Further studies have indicated that The Lancet study was correct in its findings and today in Germany, ginger is recommended by medical doctors for the treatment of motion sickness and is recognized for its superiority as well as health safety above other remedies.

If you suffer from motion or seasickness, you might want to give ginger a try, either in its pure raw form, or ground (it can be obtained in capsules), or as a beverage that contains real ginger.

In 1991, a study was conducted on pregnant women who complained of morning sickness. It was found that a 250 mg supplementation of ground ginger per day significantly relieved morning sickness symptoms among the women who participated. Throughout history, ginger has been touted as a remedy for stomach and nausea conditions, and today, science is proving that these claims are not fantasy. Indeed, ginger is very effective at eliminating stomach issues and aiding the digestive system.

It is not hard to find a number of claims for ginger and it’s possibilities for slowing and/or even curing some types of cancer. Recently, we came across a claim by a man who wrote that 500 mg of ground ginger per day cured his cancer. Such claims should be taken with a grain of salt and are not scientific by any means. However, in 2003, ScienceDaily reported that ginger may slow the growth of colon cancer cells. This claim came about after research conducted at the University of Minnesota. In addition, there are reports that Japanese scientists have also reported some success in reducing the growth of cancer cells with ginger.

This of course is no reason for you to give up the advice of your own medical doctors if you are suffering from cancer and if you decide to supplement with ginger, and you should advice them if you do decide to add ginger to your diet. But it is unlikely to cause any harm to consume more ginger.

Recently, researchers at John Hopkins University conducted a study and found that extract from ginger appears to slow brain cell loss.  The specific research is very exciting for those who are involved in treatment and research of Alzheimer’s disease, although it may be positive news for other areas of activity of the brain. Certainly there is again those who claim that ginger can help with memory and cognitive function, but as yet, these claims are unproven and at this time, only anecdotal.

Other Benefits of Ginger

Because ginger is known to block inflammatory compounds from forming, it may very well be useful in the management of diseases such as rheumatoid arthritis. More research is being conducted in this area, and in China, ginger has been used as a traditional remedy for rheumatism.  It also is said to be beneficial for the circulatory system and improving blood flow (which may be why some have used it as an aphrodisiac).

In the Ayurvedic tradition, ginger is thought to be helpful in preventing heart disease and there is some evidence that it does help to lower LDL (bad cholesterol) when taken regularly. As well, in Ayurvedic medicine, it is seen to be helpful with the conditions of asthma, menstrual cramps and bronchial conditions. Because of it’s apparent ability to assist in digestion, almost all tinctures made in Ayurvedic medicine include some amount of ginger.

There are so many ways to enjoy ginger and its relatively inexpensive. Even if you don’t experience health benefits, the taste of this spice in so many different foods, deserts, and beverages is sure to help keep you happy! And if you’re happy, that’s one part of also being healthy and beautiful!