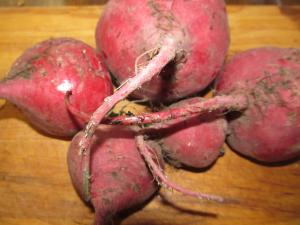 We already know that beets have much nutritional value, and are a rich source of vitamins, minerals, antioxidants and a unique type of fiber superior to most other types. But did you know there is scientific evidence that drinking beet juice can have dramatic effects on your health?

Drinking the juice of the beetroot concentrates the vitamins, minerals and other healthy compounds in a way that you obtain more of them in a glass of beet juice than you would by eating just one or two beets.  As well, cooking beets will destroy some of the beneficial compounds found in them.

Of course, you won’t get the benefits of the fiber that beetroots contain if you only drink the juice. So while you may find the information in this article exciting and decide to juice all the beets that you might have, consider ensuring that you also get the whole food in addition to the juice.

So what is the exciting information? Recent studies indicate that athletes that drink a half liter (about 2 cups) of beet juice experience more endurance and are able to extend their times in physical activity. This clearly shows that beet juice has a beneficial effect on the cardiovascular system and may play a role in reducing blood pressure as well.

While there is some controversy about the effects of nitrates, the idea that they are harmful appears to be mythical. Indeed, it is the amount of nitrates in beets that seems to make consuming the juice so effective at optimizing and helping the cardiovascular system to be more efficient in the use of oxygen.  A study conducted at the University of Exeter’s School of Sports & Health Sciences showed that consumption of 500 ml beet juice significantly improved athletic performance. How significant? Athletes were able to go 15% longer before reaching exhaustion than when they did not consume beet juice.

Our bodies create nitric oxide, which helps to enlarge blood vessels, important for circulation. However, when we add nitrates to our diet, the nitric oxide levels can be increased, which in turn provide a more dramatic effect.  When blood vessels are increased in size, and more blood is flowing, it also means that there is more oxygen available to our muscles.

There are other benefits. The studies show that not only does juice consumption increase performance, it also lowers blood pressure, improves mitochondrial efficiency and cell performance in humans, and as a result, may be helpful for many conditions.

If this is not enough for you to get juicing beets, another study found that the antioxidants in a cup were extremely bio-accessible and could be utilized by the human body efficiently and effectively.

While there is not enough scientific study to know for sure, it is possible that due to the dense nutrient makeup of beet juice, it may also be helpful for:

Prevention against a variety of cancers due to betacyanin it contains.

Liver health as it contains betaine which is known to protect the liver and help cell production.

The Taste Of Beet Juice

Some people do find the taste to be objectionable. It can have an “earthy” component to it, and sometimes also described as “grassy.” Others are able to drink it without problems, but if you do recognize the health benefits and have a hard time putting the red liquid to your mouth, consider mixing it with apple juice.

While the benefits of juicing are well known, it can be a pain in both time involved and clean up. Beet juice is not yet readily available in many supermarkets, but we’ve found the best price so far on high quality organic beet juice to be at Amazon.  Lakewood Beet Juice is cold pressed (not from concentrate) which is very important and made from top quality organic beets. Nutritional levels are high with it being an excellent source of folate, manganese and potassium.

There are so many reasons to add beet juice to your diet! Not many people even think of beets as a “superfood,” but with the research that is coming out on them, we think they ought to be right up there as a top choice for adding to a healthy diet.

Acute and chronic effects of dietary nitrate supplementation on blood pressure and the physiological responses to moderate intensity and incremental exercise. Journal of Applied Physiology (May 2010)