Twitter
Home » Supplements » Feeling A Little Run Down? Try A B
From time to time, we can all feel a little run down at times, especially when we’re rushing around, trying to meet schedules and get our work done. Conflicting schedules with others such as children in our lives can also cause stress. And, when we’re doing all of this, often we skip meals or don’t ensure they are as healthy as they could be. 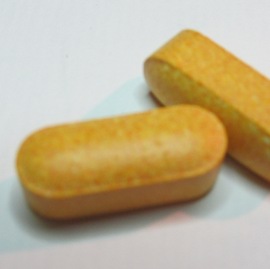 worker for you! Let’s take a look at Vitamin B Complex, and why it is often referred to as the “stress busting formula.” Indeed, many of us have lifestyles were we are not getting enough Vitamin B in our diets, and that can be partially to blame for our run down feelings both emotionally and physically.

When you remove a Vitamin B Complex tablet from the bottle, the first thing you’ll probably notice is the color – orange to yellow. The second thing is  the odd odor, which some people find a bit objectionable. If you were to stick  your nose right into the bottle of Vitamin B, it certainly wouldn’t be pleasant, but a tablet on it’s own is not difficult to overlook.

Vitamin B Complex is actually made up of a variety of compounds related to  each other. The orange color in the B tablet is given to it by the Riboflavin (also called B2), while the odor comes from Vitamin B6 which is also called Pyridoxine.

Let’s take a look at what a typical Vitamin B Complex tablet might have, and their benefits (The amounts may vary):

Thiamine is an essential nutrient that we must have, either from our diet or through supplementation. Severe deficiencies can lead to severe some severe health problems and even moderate deficiencies can have negative effects on our health. Without it, conditions including Korsakoff’s syndrome (a neurological disorder), optic nerve damage leading to decreased vision abilities, Beriberi disease, general feelings of unwellness typically called malaise, and irritability and confusion.

As pointed out earlier, Vitamin B2 is responsible for the bright orangey color in a table of Vitamin B Complex. Many people also discover that their urine, hours after taking a Vitamin B Complex may have a bright yellow color; this is caused by excess riboflavin being removed from the body. There is nothing to worry about as B Vitamins are water soluble and no harm will come from having an excess.

Deficiencies of Riboflavin in children can result in stunted or reduced growth, and in adults, it may result in dermatitus, hair loss, cataracts, and fatty liver. High doses of Vitamin B2 also appear to be helpful in the treatment of migraines and may help to destroy some pathogens.

The amide form of Niacin is what is generally found in Vitamin B Complex
formulations, It is known for its anti-anxiety properties as well and has
shown to help with Alzheimer’s disease in mice which suggests it may also be helpful for humans with this condition.

Niacin has also been shown to increase HDL (good cholesterol) levels and seems to decrease cardiovascular problems to a small degree.

Mild deficiencies of vitamin B3 can lead to decreased tolerance of cold and a slower metabolism, while severe deficiencies may lead to Pellagra,
inflammation of the mouth and tongue, amnesia, delirium, anxiety, fatigue and depression.

Vitamin B5 is found in most foods in some quantity and therefore, deficiencies of this vitamin are very rare. However, when a deficiency occurs, it may lead to fatigue, muscle cramps and issues with insulin.

Supplementation of Vitamin B5 may help other conditions including lowering LDL (bad cholesterol) and triglyceride levels and may assist with the healing of wounds. It also has reportedly shown some benefits in reducing acne. while helping with skin irritations and improving hair. However, this is when taken internally and the use of Pantothenic Acid in shampoo products is likely useless and will have no benefit to dead hair cells.

Vitamin B6 is very important in the metabolism of macronutrients and
metabolism of amino acids in the body. Deficiencies are fairly rare except in the cases of alcoholics who are malnourished, people with liver disease, rheumatoid arthritis and type 1 diabetes. Some drugs can also interfere with the ability of the body to use Vitamin B6, and supplementation is highly recommended.

B6 supplementation has been shown to be successful with nausea among pregnant women and may also lower the risk of Parkinson’s Disease. It may also play a role in memory and increase the vividness of dreams.

Interestingly, a minor deficiency may increase the risk of carpal tunnel
syndrome in some. Other conditions which may be helped with supplementation of B6 include ADD (when used in conjunction with magnesium supplementation), reducing homocystiene levels, assisting with premenstrual syndrome, and lessened symptoms of depression.

Biotin is another one of the B Vitamins where deficiency is rare, but
supplementation may be beneficial and certainly not harmful. It is required for the growth of cells, the production of fatty acids as well as fat
metabolization. The reason deficiency is rare in humans is because the
bacteria in our digestive systems produce biotin. However, when a deficiency occurs, it can cause skin problems like dermatitis and rashes as well as hair loss and more serious conditions such as mental depression, hallucinations and tingling feelings in various parts of the body.

Pregnant women are especially at risk for a decrease in biotin.

Supplementation has shown to be helpful with some forms of dermatitis, blood sugar level controls in diabetics, brittle nail problems, and  rheumatoid arthritis.

Folic acid, or Folate as it is sometimes called, is a very important B Vitamin and responsible for many of the functions carried out in the body. Much research continues to be done on this vitamin with new discoveries being made frequently. It is needed to repair and synthesize DNA and is especially important when there is major cell growth such as in pregnant women and growing children.  Without folic acid, healthy red blood cells might not get produced in sufficient quantities and is needed especially in children and pregnant women to prevent anemia.

Although in most diets such as those in Europe and North America, folic acid deficiency is not very common, when deficiencies do occur, they can lead to serious conditions such as nerve damage, weakness in breath, confusion, depression, and other mental conditions.

Supplementation could help to prevent many of these things and some studies have shown that depression can be helped with folic acid supplementation.

This vitamin plays a huge role in just about every part of the normal
functioning of the brain as well as every cell in the body. Without it, the
nervous system and brain would not perform correctly. A deficiency may cause damage to the brain and nervous system that cannot be repaired.

Even a very minor deficiency of Vitamin B 12 can lead to symptoms such as memory loss, fatigue and depression. This is one B Vitamin you want to pay attention to (although they are all vital to your good health and happiness).

If you drink alcohol frequently, you likely need to supplement with Vitamin  B12 (along with the range of B Vitamins in B Vitamin complex tablet). Alcohol can decrease absorption of B12.

If you are on antibiotics, it might be helpful to have your B12 levels
monitored as these too can decrease absorption of the vitamin.

Do you smoke? Another important reason to supplement with B12 as nicotine can reduce levels of B12 in the blood.

If you are a vegan, it is highly unlikely that you are getting enough B12
through your diet. Some have claimed you can get it through the bacterial
sources in the digestive tract, but there is little evidence for this.

Although PABA is often included in a Vitamin B Complex tablet and has
sometimes been referred to as B(x), it is not really a vitamin. Rather it is an intermediary in the synthesis of folate. There is debate as to whether it is required but some have suggested that it can be a helpful supplement for fatigue, irritability, some skin conditions, and reduce skin sensitivity to sunlight.

It has been deemed as being of no harm, so it is often included in a Vitamin B complex tablet.

If your B Complex does not contain PABA, don’t worry about it.

Often grouped with B Vitamins, choline is another nutrient that is in high
demand by our bodies at various times and is required for healthy functioning. It is especially important for pregnant and lactating women to have high levels of choline and when deficient, has shown to cause memory problems later in  life for the offspring as well as possibly poor physical development.

One study showed that 80% of men and women, when deprived of choline developed liver disorders. This study was conducted in Novemver 2010 by Leslie M.  Fischer, Kerry Ann da Costa, Lester Kwock, Joseph Galanko, and Steven Zeisel.

One of the problems with getting enough choline is that the best sources are eggs and meat, two foods that many people have reduced eating. Vegetarians and vegans are especially at risk of a choline deficiency if there is no supplementation.

Some other uses of choline include:

As we can see, there are tremendous benefits from supplementing with a Vitamin B Complex tablet daily.  It is highly recommended that you take it with food  to get the best possible absorption along with other nutrients that might be helpful in its absorption and use by your body.

Your own lifestyle may even be depleting you of one or more of the Vitamin B’s, and in order to stay Healthy, Happy, & Beautiful, get yourself a bottle and take at one a day!