Garlic has been in use as both a food and a medicine around the world for over 6,000 years.  Due to its odor as well as the ability to cause what some feel is horrible bad breath after being eaten, it is loathed by some, yet loved by many more for the taste it can impart to other foods.  And some people absolutely adore the odor of garlic being cooked.

It's been highly revered in many cultures down through the ages, although in North America was not used often in many households and restaurants as it was seen to be a food that only poor immigrants would eat. That attitude began to change in the early 20th century in North America.  Over the past twenty years alone in the United States, consumption of garlic has increased from under 1 lb. per year to almost 3 lbs. per year, per person! However, other nations consume much more than that: A recent article in Bloomberg claimed that Koreans consume over twenty-two pounds per year, per person!

As a medicine, it has had traditional uses that include being a digestive aid, an aphrodisiac, treating coughs and colds, fevers and even parasites growing inside the body. It has also been used to treat snake bites and asthmatic conditions. Of course, if you believe in vampires, you are probably aware that garlic was seen as a food that would scare vampires away! Today, we know that garlic has some very healthy uses with many scientific studies done on it and the compounds and chemicals that garlic contains.

The main active compounds in garlic are sulfuric, however there are many compounds that have been found and that are good for your health.  When fresh garlic is cooked, some of the compounds are destroyed, however this can be diminished by cutting or crushing the garlic clove and letting it sit for a short time before using it to cook with.

Garlic has been known to have antibiotic properties and has been used successfully to treat wounds by making a poultice out of it. During the second world war, garlic was often used in this manner in order to treat wounds on the battlefield.

As an antioxidant, it provides protection for the heart and cardiovascular system as well as quite possibly protecting against other illnesses.

As a cancer preventative and even cancer fighter, garlic is showing many promising results with hundreds of studies done on garlic and its various compounds.  In February of 2012, the Genes & Cancer medical journal published a report in which it was written:

We report here that fresh extracts of garlic (not boiled) arrested the growth and altered the morphology of MCF7 breast cancer cells.

A study published in Acta Biochim Biophys Sin (Shanghai) (ABBS) indicates that another compound found in garlic, Diallyl trisulfide (DATS), may be helpful in treating lung and other cancers.  In this study, the DATS compound was administered orally with excellent results of having cancer cells decreased.

Garlic may also be an excellent preventer of liver disease.  In a study published in the peer-reviewed Journal of Agricultural And Food Chemistry (2012 Nov 7;60(44):11104-19. doi: 10.1021/jf303800p. Epub 2012 Oct 26),  both garlic oil and DATS appeared to have helped normalize some liver functions while also reducing triglycerides and bad cholesterol.  It has been shown in other studies to lower LDL cholesterol, which explains why it is also good for general blood circulation.

It has also been reported that garlic may reduce the number of incidences of the common cold in those who regularly take it - but this is more of a preventative measure. Taking garlic when you have a cold will not likely reduce the symptoms or shorten the duration of the illness. 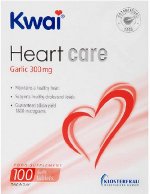 A recent study done at the University of Karachi involved the use of garlic as a possible treatment for Type 2 diabetes. In the study, there were two groups of patients, one group that received 300 mg of KWAI garlic tablets three times a day, while the second group received a placebo. Both groups were also administered their diabetes medication, Metformin.

The study caused the authors to remark, "Garlic may be a good addition in the management of patients with diabetes and hyperlipidemia."

So what about it's use as an aphrodisiac? It is quite possible! When you consider that garlic has so many healthy uses, including helping to keep the cardiovascular system in good shape, it could mean that it assists with blood flow to those erogenous zones, helping to "make things happen."  Of course, you'll want to make sure that both you and your partner have consumed garlic - or the kissing might not be so pleasant!

Healthy, happy and beautiful people make sure they regularly consume garlic. Don't forget though, the best way is fresh, and if it is to be cooked, let it sit after being cut or crushed before tossing in the pot or baking dish.

Should I Take A Garlic Supplement?