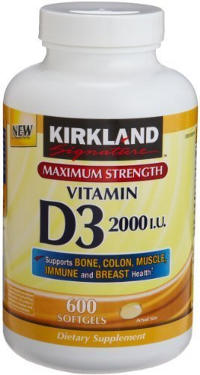 Vitamin D3 is the preferred form of Vitamin D. Click image to purchase.

There is some exciting news for those who suffer with Multiple Sclerosis (MS) and who are in the early stages of the disease. A recent study published in JAMA Neurology indicates that Vitamin D may slow the progression of MS. The January issue of the medical journal reports that over a five year period, 468 MS patients were monitored and serum concentration of 25-hydroxyvitamin D also known as 25[OH]D, were measured.

The results indicated that those patients with higher levels had slower progression rates of MS and a decreased number of brain lesions.  In the past there has been a great deal of debate over whether there was an association between low levels of Vitamin D and MS. However, this study should put some of the debate to rest in the sense that patients with higher levels of Vitamin D have a slower rate of MS progression.

What Is 25-hydroxyvitamin D?

25-hydroxyvitamin D or “25[OH]D” and also known as caldifediol is a prehormone that is produced by a chemical process called hydroxylation in the human liver, from Vitamin D3.  To determine how much vitamin d is in a patient’s body, a doctor would have a blood test done that tested for levels of 25-hydroxyvitamin.  Vitamin D3, unless supplemented, is usually obtained from exposure to sunlight. As the skin absorbs ultraviolet B light, it is synthesized underneath the skin.

A Vitamin D deficiency is quite common in populations that do not get much sunlight especially during winter months.  There are very few sources of dietary vitamin d, although it can be obtained from seafood such as fatty fish and especially in the organs of fish such as the liver.  Presently, many countries are looking at increasing the recommended daily allowance of Vitamin D as many health professionals believe it is too low.  Presently in the USA, the RDA is 600 International Units (IU).  How much time in the sun does it take to get the required daily amount? According to the Vitamin D Council:

With this in mind, it is quite obvious that many people are not getting enough Vitamin D unless they are supplementing. In addition, many doctors and health care professional are suggesting that 600 IU per day is far too low to prevent a Vitamin D deficiency with some doctors recommending as much as 8,000 IU per day as a supplement.

Which Vitamin D Should You Take?

There are two forms of Vitamin D and you should carefully consider which one you will take as a supplement. Vitamin D2 is a synthetic form, while D3 is made from natural sources. Some studies show that while Vitamin D2 is helpful, D3 is much more readily used and absorbed by the body. Vitamin D3 is the same as the Vitamin D that your body manufactures when your skin is exposed to sunlight.  If you are taking a Vitamin D supplement, carefully check the label to see which form it is.

It is virtually impossible to get too much Vitamin D from the sun, and Vitamin D poisoning is very rare. According to the Mayo Clinic, there have been cases of hypervitaminosis D which can weakness, nausea and vomiting. However, this level of toxicity occurred when 50,000 IU were taken daily for a period of months.  If you are concerned, you should talk to your doctor and have a blood test done for Vitamin D levels.

Halibut Liver Oil – Get Your Vitamin A & D