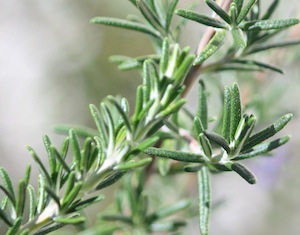 Rosemary is an evergreen bush that has been used for centuries in home remedies for everything from the common cold to prevention of the plague. It originated in Mediterranean regions, and was introduced to Britain by the Romans. It’s not a difficult herb to grow, though in frost-prone climates, the plants should be wintered indoors in front of a sunny window. While rosemary has been cultivated to produce flowers of many colors, as a supplement the normal white-flowered Rosmarinus officinalis is preferred.

Modern medicine has found rosemary to have wide range of health benefits. Rosemary leaves contain a number of compounds, particularly carnosol, carnosic acid, ursolic acid, and rosmarinic acid, that have been shown to have potential in treating or preventing a spectacular variety of  medical conditions.

Rosemary leaves are rich in carnosic acid,   a powerful antioxidant  that has been found to exert anti-inflammatory and anti-hyperglycaemic effects, improve cholesterol levels and prevent thickening of the artery walls, improve brain function by stimulating nerve factor synthesis and increasing blood circulation in the brain, and promote weight loss.

Rosemary may also play a part in a weight loss regimen. A Swiss study that  tested the effects of rosemary on the prevention of weight gain found that mice consuming 200 mg of rosemary extract per kg of body weight along with a high-fat diet had significantly lower weight gain than those which did not, and those that consumed 1/10th the quantity of the extract. The extract also appeared to protect against  obesity-related liver steatosis.

A similar American study found that mice fed on a high fat diet supplemented with rosemary extract had weight gains of 69 and 79 % less than those on the same diet without the supplement.

Rosemary extract may even prove beneficial in the prevention of baldness, as an animal study performed recently in Japan showed that a twice-daily topical application of rosemary extract on mice with induced hair loss improved growth.  Researchers found that the rosemary treatment  resulted in the inhibition of testosterone 5α-reductase, which is well recognized as one of the most effective strategies for the treatment of male-pattern baldness.

Related:
How To Make Rosemary Tea