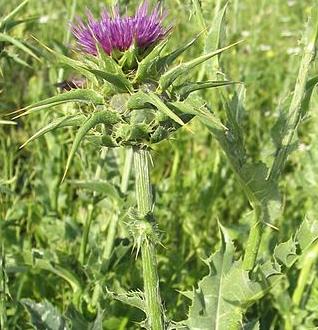 A stout annual (sometimes biennial) herb plant that was originally found in the dry soils of southern and western Europe, it also grows in some areas of the United States in it’s natural state. It can grow up to 3 feet high and has dark green leaves that are shiny but with spiny edges. The flower heads are purple in color.

Milk thistle is another herb that has a long and ancient history known for its healing properties and it is likely that it arrived in the British Isles by way of the Romans as they marched and conquered Europe and finally England (but not Scotland).  It has a long history in the medical annals and was written about and described by the 1st century  Pliny for getting rid of bile. Later, it was prescribed for melancholy and even snakebite. Interestingly, it has been used to treat people who have been poisoned by Death Cap mushroom which is very toxic to the liver and can cause death within just hours of consuming it.

One of its other names, St. Mary’s Thistle, comes from the belief that the white blotches on the leaves are the result of the Virgin Mary’s breast milk falling onto the plant and it was quite often used to improve lactation. Indeed, modern studies indicate that the nurses of the medieval days may have been quite correct in using it for mother’s that required help in breast feeding.

How Milk Thistle Is Used:

The leaves are often used as a bitter tonic while the seeds are ground into powder and is suggested for a variety of stomach problems including a lack of appetite.  In addition, the seed powder is used to heal and protect the liver, gallbladder and spleen.  As well as powdered seeds, its been used as an infusion where about a teaspoon of  milk thistle seeds are allowed to soak in 1/2 cup of water with a daily dose of 1 to 1 1/2 cups. It has also been used in tincture form.

Perhaps the most promising and exciting research  is that being done in the area of milk thistle (and it’s active ingredient, silymarin) in a role it can play in reversing liver damage. There have been a number of studies over the years which show that with supplementation of milk thistle can improve liver function and reverse damage in both adults and children.  Chemotherapy can damage the liver and milk thistle offered protection to children who were undergoing this cancer therapy. It has also been shown to be helpful in cases of hepatitis as well as cirrhosis of the liver.

Although more study is needed, milk thistle also shows promise in lowering cholesterol, reduced growth of cancerous cells in prostate and breast cancers, and maybe a choice of treatment for diabetic nephropathy.

Certainly, our ancestors recognized the value of milk thistle and while there was a time when it went out of favor as a medicinal aid, we now know today that it certainly does have health giving benefits, especially for our livers which is vital for healthy, happy and beautiful living.