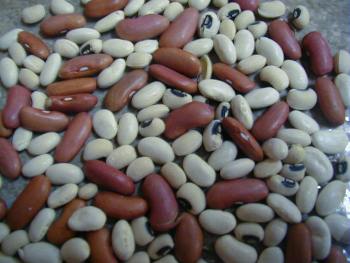 Beans and legumes are one of the oldest cultivated foods in the world and are sometimes referred to as “poor man’s meat” because of they are both inexpensive and are an excellent source  of protein.  Because varieties of beans can be found growing on just about every continent (excluding Antarctica), they are a staple in many cultures’ diet and cuisine.

Today, India accounts for the greatest proportion of bean production in the world with almost 5 million tonnes annually. World wide production is estimated at over 23 million tonnes of beans every year.  In the US, dried bean consumption is estimated at between 6 and 9 pounds per person. The USA produces just under 1.5 million tonnes annually of which pinto beans make up forty two percent of the total. This is followed by navy (17 percent), black beans (11 percent), great northern (5 percent) and large chickpeas (5 percent).

There are a number of references to beans, legumes and pulses in ancient texts, and in the Old Testament, Daniel insists on a diet of pulses and water (Daniel 1:11-13).

One of the reasons that beans are a staple in many diets is because of their versatility. While many in North America use beans in chili dishes, Mexican foods and as baked beans, they can also be made into salads and soups. In addition, dried beans are sometimes ground into flour and used in baking and cooking as well.

They can be stored for over a year in most situations, and for even longer when stored in bags made of mylar and all oxygen removed from the storage bag. They are best stored in cool temperatures as higher temperatures can cause the beans to harden to a point where it takes longer to rehydrate them. When they can no longer be dehydrated, they can be ground into flour.

Beans have a very high nutritional value and therefore have many health benefits.  They are an excellent source of protein (twenty two percent of beans is made up of protein) but do not contain all essential amino acids. They lack in one: methionine. However, eating a dish of beans and rice will provide all the essential amino acids that humans require.

In addition to being an excellent source of protein, they are also high in fiber. Adding beans to your diet regularly will help to lower cholesterol levels and reduce the risk of heart disease. They may also help to prevent colon cancer and studies show that people who consume beans regularly had lower rates of type 2 diabetes than those who did not eat beans on a regular basis.

1 Cup of cooked pinto beans contains 79 mg of calcium, 86 mg of magnesium and 746 mg of potassium.  They are also a good source of iron and trace minerals including manganese, copper and molybdenum.  Beans are also a source of several B vitamins including folic acid. With zero cholesterol, and lots of nutritive value, beans make a great choice for a healthy diet when eaten regularly.

Many are familiar with a few different varieties of beans including pinto, black, and kidney beans, there are literally thousands of bean varieties you can try. Many, such as chickpeas or garbanzo beans are used in a number of different ethnic cuisines. They also come in many different sizes and colors and therefore can also be used to add contrast and color to meals.

Common bean and pulse varieties include:

There are many many more, each with their own unique flavors, textures, shapes, sizes and colors.  Be sure to experiment with many different kinds of beans to find out which ones you might like the best to add to your diet.

The Surprising Health Benefits of Beans