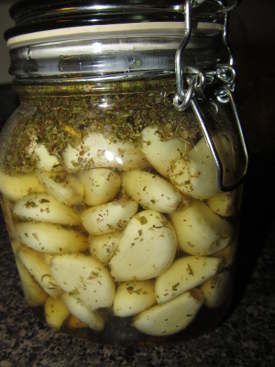 Fermenting garlic with oregano in a salt water brine solution.

If you’ve been living on a western diet for most of your life, this might be a difficult conversation to have. We’re going to discuss bacteria in both your food and your gut – which include your stomach and intestines. There’s lots of these micro-organisms living inside you! It may sound yucky, but in fact, they are thriving and what should matter is that the good ones are thriving inside you more so than the bad ones. But first, let’s talk about the food you eat:

So much of the food you’ve eaten has likely been processed, sanitized, sterilized and disinfected. All in the name of “food safety” and killing off nasty germs. In some respects, this is not entirely a bad thing. Past generations in North America would often “can” their own food as a way to preserve it, using heat – but they didn’t always do a great job and often food would spoil. Having someone else do it – food processors – that followed strict regulations have perhaps reduced the amount of food spoilage, and of course it is more convenient to purchase canned preserved food in grocery stores on a “as needed or wanted” basis.

However, canning or preserving food in this manner also has a major downside in that not only is it sterilized, the nutritional quality is vastly decreased. And in addition to the nutrition being reduced, you are likely not consuming as much probiotics as is optimum.  And it gets worse:  Processed and commercial canned foods often contain potentially harmful additives.

The art of food preservation has been known for thousands of years and long before commercial canning and refrigerators, mankind has been preserving food.  Although the processes were not completely understood, many cultures learned that by putting food into a brine (salt and water solution), it could be kept almost indefinitely. What past generations did not know was that this process involved fermentation – the same type of fermentation that occurs when making yogurt and even bread dough.  Anaerobic bacteria as well as yeast get to work on the food, fermenting it while also out competing harmful bacteria. Because harmful bacteria are less likely to get a “foot hold,” the food is preserved and is very safe and nutritious for humans to eat.

Almost every culture throughout the world has fermented food in their diet to some degree.  Preserving food in this manner goes back to at least 12,000 years, even before the ancient Egyptians and Babylonians were fermenting beverages. Throughout history, we discover that the Romans ate a wide variety of food including fermented fish such as anchovies.  This food was called “garum” and features prominently in both civil and military life with the diet of Roman soldiers relying heavily on the fermented anchovies.

In the 18th century, if it were not for the discovery that sauerkraut could ward off scurvy, Britain’s sailors may not have been able to have accomplished what they did as they sailed on long journeys.  Although today most commercial sauerkraut’s are an imitation, true sauerkraut which provided the British Navy men with Vitamin C and other nutrients was made through the process of fermentation.  It did not require refrigeration to prevent spoilage and was a vital factor in ensuring survival.

Today, many culture’s continue to eat fermented food and gain considerable health benefits for doing so. Kimchi is a Korean fermented food that is now enjoyed in both Japan and throughout North America.   In India, yogurt, dahi, gundruk, sinki, iniziangsang, iromba, fermented rai, kanjika and handua are not just foods but also considered medicines with healing properties.  As one study suggests, fermenting food actually can “exploit the potential” of foods; in other words, make it even more nutritious than when it is raw.

These are just some of the benefits and others have found tremendous increases in health once they began to consume more fermented food.  Sandor Katz, author of “Wild Fermentation” reports that he believes fermented foods have a great deal to do with the management of living with AIDS/HIV.  From the back cover of his book, “A long-term HIV/AIDS survivor, Katz considers fermented food to be an important part of his healing.”

Many medical researchers believe that the consumption of fermented foods and increasing our bodies’ abundance of Lactobacilli bacteria improve the chances of longer living lives that are also healthy.  There is some evidence that consuming fermented foods may also reduce the risk of cancer, as well as the frequency of illnesses such as the the Common Cold and the flu.

Should You Buy Fermented Food?

One of the biggest problems with purchasing foods that have been fermented is that quite often, they have also been pasteurized. This means that not only have any bad bacteria been destroyed, but so have all the good bacteria.  You need to look very closely at the label on the food to determine whether it has been pasteurized or not, and whether the food contains live bacterial cultures.

Most commercially available sauerkraut for example, do not contain any of the beneficial bacteria that it would have if made at home.  Many yogurts on the other hand that you might purchase at the grocery store, do contain live cultures but not all of them do.

What Foods Can Be Fermented?

Virtually any food including fruits, vegetables, grains, legumes and even meat can be fermented. As written above, even lemons can be fermented and this process improves their taste in some dishes, according to many. We agree!

The Native peoples of the Arctic regions have been fermenting fish and whale meat for probably as long as they have lived there.  Fermented fish is a cultural tradition of some Asian peoples as well.  Meat and fish however, are a special case and we’ll devote a separate article to that subject on it’s own.

But for most people, fermenting vegetables and other produce is very safe and quite easy. The amount of space that it takes up simply depends on the quantities that you want to make. In addition, the degree of fermentation is up to how long you wish the food to sit on the counter or in the cupboard before you decide to put it in the fridge or store in a cold cellar or other cool location.  Some of the more common foods that are fermented include cabbage (made into sauerkraut), garlic, carrots, and other vegetables.  Grains and legumes are often fermented but for a shorter time.  Once you start fermenting your own foods, it’s up to your own imagination at what to try, taste and experiment with. Many people will add herbs and spices to their ferments – one common one around here is to ferment garlic with oregano leaves, for example.  Of course,  cabbage fermenting with caraway or fennel seeds is also popular.

There are also different ways to ferment foods, some are done by yeast (wine fermentations, ginger beer, etc.), some strictly with natural anaerobic bacteria in a salt brine, while kefir grains contain a symbiotic mixture of both yeast and anaerobic bacteria.

What Special Equipment Do You Need To Ferment Your Own Food? 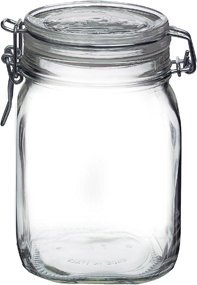 Considering that humans have been safely fermenting foods for thousands of years, you really need no special equipment to ferment your own. We’ll discuss different methods in more detail in other articles and tutorials, but for now, we’ll look at fermenting foods like garlic and other vegetables.

While some insist on special “fermentation vessels” with airlocks, this is not generally necessary. For more advanced fermentation like making wines, meads and alcoholic beverages, using vessels that can be fitted with an airlock is more important. However, for fermented foods including vegetables, it is not necessary.  Mason jars make for wonderful fermentation vessels as long as you remember to “burp” them by opening the lid a couple of times per day while the fermentation process is going on.  When foods are being fermented, the bacteria or yeast produce carbon dioxide (CO2) which can cause pressure buildups.

Because of this, some people like to use good quality Fido jars, which are able to release pressure buildups while also preventing oxygen from getting into the bottle with they way they seal.

The only ingredients you need for most types of food fermentation are the food you wish to ferment, salt, and water. The salt and water are mixed together to form a brine and creates an environment that makes it difficult for bad bacteria to live in but provides an environment for good anaerobic bacteria to thrive.  While there are different formulas for the brine solution depending on the foods, generally speaking, we use a tablespoon of salt for every 4 cups of water. You can get as scientific as you wish with food fermentation or you can also keep it very simple; it’s up to you!

One of the first things we ever fermented was garlic and it was very simple. The hardest part was removing the skins from the garlic until we came across a quick and easy method to do that. But for now, let’s say you want to try fermenting a food and you have access to a good number of garlic heads.

Depending on the size of the garlic cloves and bulbs, you may need at least 15 to 20 garlic bulbs to end up with a quart of fermented garlic.  Basically all you need to do is:

Within about 24 hours, you should see activity in the bottle consisting of bubbles forming. This is the CO2 that is being produced by the bacteria as they work their magic. You’ll want to loosen the lid to release the CO2 that has been built up and continue doing that at least a couple of times per day for the next week. After a week, taste your fermented garlic! You will find that it is not has “hot” as raw garlic and yet has additional flavors as well as other healthy benefits (who knew you could make garlic even healthier than it already is?).

After you’ve allowed the garlic to ferment, store the bottle and it’s contents in the fridge which will stop the fermentation process. The bacterial will go dormant but will not die in the fridge. When you consume your fermented food, the healthy bacteria will come back to life in your gut, and will help to keep bad bacteria that cause illness and disease at bay.

After much research, we here at Happy, Healthy, Beautiful are convinced of the many benefits of food fermentation and have made fermented foods a regular part of our diets. In addition to more articles on research done on supplements, herbs, spices and foods that are good for you, we’re going to provide more articles and how-tos with specific recipes for food fermentation. In the meantime, if you’d like get started and are looking for even more ideas, we strongly suggest the book, “Wild Fermentation. The Flavor, Nutrition and Craft of Live Culture Foods” by Sandor Katz. It has many recipes and covers a wide range of fermentation processes that are not complicated. You can purchase the book here from Amazon.

If you’d like to use Fido jars (which are perhaps better than regular Mason Jars), you can obtain them here.

Also by Sandor Katz: “The Art Of Fermentation.”  More here.

Is It Safe To Ferment Foods?

Fermented Cucumber – Health Made At Home

How To Ferment Garlic

Arjuna, Shivani. Making and Eating Fermented Foods: The Why And How.