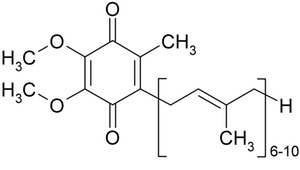 Coenzyme Q10 (CoQ10) is a naturally occurring compound produced by the human body and is necessary for the basic functioning of cells. CoQ10 levels are reported to decrease with age and has therefore been an additive in anti-aging creams. While we can’t guarantee it will make you younger, it has been shown to have potential treating or preventing a number of diseases.

CoQ10 levels are also reported to be  low in patients including some heart conditions, muscular dystrophy, Parkinson’s disease, cancer, diabetes, and HIV/AIDS, as well as people taking cholesterol-lowering drugs, making coQ10 a potential treatment for many of those diseases.

CoQ10 functions as an antioxidant, protecting cells against the effects of free radicals, which damage cells, and plays an important role in maintaining normal heart function. CoQ10 is also an important co-factor in energy production, which helps with myocardial (heart) contraction. Insufficient levels of CoQ10 can weaken the heart causing it to pump blood through the body less efficiently.

Alzheimer’s disease is the most common form of age-related dementia. Although there have been more than a thousand clinical trials on different drugs and treatments of Alzheimer’s, there is no cure for this disease, which places great strain on the sufferer and particularly on the caregivers.

Although some studies show that long-term CoQ10 use beginning in young adulthood is actually detrimental to age-associated neurodegenerative disorders, other researchers have found that taking CoQ10 in relatively high doses when symptoms of cognitive decline have already begun can reverse those impairments can reduce the damage and improve brain function. Therefore, it may be beneficial to Alzheimer’s sufferers to supplement with CoQ10 once symptoms have begun.

After Alzheimer’s, Parkinson’s Disease is the second most common age-related disorder in the world. There is no cure for Parkinson’s, and treatments thus far have been to delay and relieve the symptoms of the disease.

CoEnzyme Q10 is one of the supplements that has been found to have the potential to alleviate the major risk factors of Parkinson’s Disease, namely  oxidative stress and mitochondrial dysfunction, thereby preventing or delaying the onset of the disease.

Clinical studies have shown that taking coenzyme Q10 as a supplement has the effect of improving insulin secretion in type 2 diabetics , and in type 1 diabetics led to “relief of hyperglycemia, decrease in the concentrations of glycosylated hemoglobin and LDL cholesterol, and improvement of nitrogen metabolism.”(http://www.ncbi.nlm.nih.gov/pubmed/22803087)

Some recent research has been pointing to the a metabolic abnormality as a root cause of at least some  chronic migraines, which may explain why coenzyme Q10 has been found to be an effective preventative supplement for migraine headaches in many cases.  A double-blind random study found that migraine sufferers supplementing their diets with coenzyme Q10 was successful in preventing migraine attacks by 50% when taken over time.

As a supplement, CoQ10 is best taken along with a fat or oil as it is fat soluble. Consider consuming along with coconut oil.