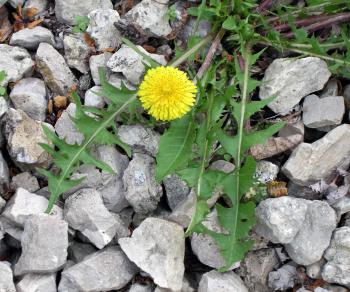 This ‘weed’ may be able to cure cancer!

The next time you see a field of dandelions, you may be wanting to put up signs that say, “No Spraying – Dandelions are NOT Weeds!.” There is some amazing and interesting new research that suggests that dandelion root may have something in it that can actually cure some cancers. We have always believed that many of the cures for diseases that sometimes face us may be found in nature, and cancer is no exception.

Traditionally, common dandelion root (Taraxacum officinale) has been used as a medicine for a variety of conditions. It has often been brewed into a tea, or dried, then ground and used as a coffee substitute and has been prescribed for digestive problems such as an upset tummy and diarrhea, as well as kidney and liver problems. In one study published in January 2010, dandelion root was also found to contain anti-oxdants that had a powerful effect on positive enzyme activity as well as lowering overall cholesterol levels.

Another paper that was published in the International Journal of Molecular Sciences (2010) reported that dandelion extract had protective and restorative properties in damaged livers of mice. While these studies have not been conducted on humans yet at this time, the evidence suggests that dandelion extracts could very likely have the same health benefits for humans.

What is even more exciting however is that Health Canada recently granted permission to researchers at the University of Windsor to conduct human trials on humans that have cancer! The request for this permission was based on the fact that a previous study showed remarkable success against stopping and killing cancer cells in mice when administered a dandelion root extract. Follow up studies by Dr. Pandey showed that this extract has the ability to destroy cancer cells (the study says the cancer cells literally committed suicide) in the lab and at the same time, had no toxic effect on normal healthy cells.

It has taken about three years to get the go ahead approval from Health Canada, but Dr. Pandey and his research team are very excited. Now that they have received permission to conduct human trials using dandelion root extract, they will be conducting trials on cancer patients where there cancer has progressed to a point that there is no other known treatment available that will help them.

One of the caveats about the trials though is that the extract they will be using is five times more powerful and concentrated than what is normally available commercially. But even still, it is exciting news that a natural cure for some cancers may be discovered – and to think that the cure may be considered a “noxious weed” in some places!

There are also some anecdotal reports about dandelion root curing people’s cancers although not scientifically confirmed. In fact, two leukemia patients in Canada who, after having gone through all the Western medical procedures with no results, decided to try dandelion root tea and soon went into remission. They have remained in remission for over three years. Dr. Pandey knew of these patients and was intrigued by their results.

While not based on modern science, it is known that both Native American and Traditional Chinese Medicine have documented and used dandelion root for a variety of cancers including breast cancer and leukemia. But there is evidence it may be effective against other types as well.

Another anecdotal claim involves a male with prostate cancer deciding to give ground dandelion root tea a try. He claims that within three weeks of daily consumption, the pain began to disappear. Almost six months later, there was no sign of the cancer and it has not returned.

While these are anecdotal reports, it is exciting to think that perhaps we’ll get some answers soon, and there will be real hope for cancer sufferers, while also using medicine that is not toxic to their healthy cells in the same way present cancer treatments are.

Antioxidant properties of Taraxacum officinale leaf extract are involved in the protective effect against hepatoxicity induced by acetaminophen in mice. (Abstract)