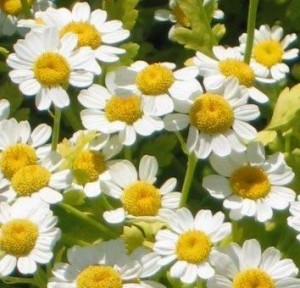 Known since at least the Middle Ages as a treatment to reduce fevers and relieve pain, feverfew, also known as bachelor’s buttons, fell into disuse with the rise of modern medicine only to be brought back to popularity by migraine sufferers in Britain in the 1970s.

This relative of garden mums was imported into North America and, because it is so easy to grow, can now be found in gardens, roadsides and forest edges in many parts of the United States and Canada. Glowing testimonials from migraine sufferers have led to clinical studies proving its therapeutic value.

The active ingredient in feverfew is parthenolide, which is an anti-prostaglandin. Prostaglandin is a substance produced by the body and associated with the pain of both menstrual cramps and migraines. Feverfew also seems to prevent  blood platelets aggregating the same way as Aspirin does, leading some people to call it “The medieval Asprin.”

Feverfew has not been clinically shown to be effective to stop a migraine that is already in progress, but studies of its regular use over time have  demonstrated that it has the potential to reduce the frequency and strength of migraines by up to 70%.

Parthenolide has also been found to have strong anti-leukemic properties which makes it a source of one of the strongest treatments for leukemia at the stem-cell level. Although enough parthenolide can’t be ingested as a supplement to affect the cancer, extracts made in the laboratory have been proven very effective at destroying leukemia cells.

Feverfew is also high in Vitamin A and C as well as niacin and iron, giving it value as a dietary supplement as well.

Feverfew might be one of those herbs you should grow yourself. It is a hardy plant that can grow anywhere there’s sufficient sunlight and good soil. Your main concern will eventually be not how you can make it grow, but how you can keep it from overrunning your garden. The taste is somewhat bitter, but to take a migraine preventative dose requires only approximately two leaves a day, which can be mixed in a salad, dried and added to stews, soups or curries,  made into tea, or put on a sandwich with other ingredients to mask or minimize the taste.

Although feverfew is available in tablet form,  the active compound, parthenolide, is found in only small amounts when processed this way. Some feverfew supplements contain no parthenolide at all. If you do choose to buy it from the pharmacy, check the parthenolide content before you buy.

Even then, you may need to take care. A study published in the Canadian Pharmaceutical Journal tested 30 different brands of feverfew tablets and found that, “the majority of products deviated significantly from the stated label claim. Only six of the 30 lots claiming a specific amount of parthenolide were observed to contain between 90.6% and 111.5% of label claim.”