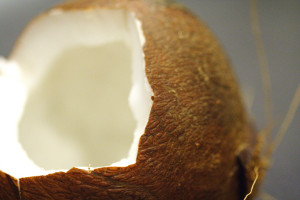 Coconut oil seems to be all the rage right now, with many health benefits ascribed to it. It has not always been this way however, and for many years, coconut oil was thought of as an unhealthy saturated fat.  That view is changing and today, sales of this oil which is used in many ways is on the rise.

Coconut oil was actually quite popular in America before World War II, however with the war including Japan, this caused major supply problems for both coconuts and it’s derivatives as routes from the Philippines and other producing countries were cut off. As a result, other oils including vegetable oil became more readily available.

Today, the Philippines remains the highest producer of coconuts in the world, with an annual production of over 19,000,000 tonnes. Coconuts are now also cultivated in Mexico, India, Brazil and some parts of the Middle East.

Let’s take a look at why coconut oil is now considered a “healthy food” and at some of the curative and preventative qualities it may have:

Is All Saturated Fat Bad?

For many years, it has been thought that saturated fat as opposed to unsaturated fats, were dangerous and bad for the health. The view on this is changing somewhat with recent studies indicating that saturated fats may not be as harmful as once thought. In addition, the about half of the saturated fat that coconut oil is made up of is called Medium Chain Triglycerides, or MCT’s.  MCT’s are believed to be burned as energy quite quickly and do not seem to be stored in the body as fat.

It is because of these MCT’s in coconut oil that many claim an energy boost after consuming it. In addition,  MCT’s may also help to increase metabolism with a possible result in weight loss.

Coconut Oil As A Sunscreen

Many people have touted the benefits of coconut oil not just as an internal healthy food, but also when applied externally to troubled skin areas.  In addition, some will even use it claiming it has properties as a sunscreen.  However, if you are concerned about solar caused skin cancer, coconut oil may not be your best choice. According to the Mayo Clinic, coconut oil will block some sun rays – perhaps 20%, but a sun block with an SPF rating of 30 will block 97% of the sun’s rays.

On the other hand, you may still want to consider using coconut oil as a skin and hair enhancer as it has very moisturizing properties. There is a great deal of anecdotal evidence that it can be used to help with healing of wounds, liver spots, and even bags under the eyes when regularly applied.

Coconut oil is an excellent source of lauric acid – a fatty acid that forms over 6% of human breast milk.  Lauric acid is known to have antimicrobial properties and as a result, may be effective at helping to prevent infections such as the common cold, flu, and pneumonia. A recent experiment involving children that had contracted bacterial caused pneumonia found that adding coconut oil with along with antibiotics that were prescribed appeared to cause a decrease in the severity of symptoms as well as a faster recovery than those who were on antibiotics alone.

Another study showed that lauric acid in coconut oil may be helpful in fighting Staphylococcus aureus bacteria which is responsible for a variety of infections including those involving the skin, respiratory system and joints.  The fact that coconut oil may be helpful in fighting these infections is interesting as the medical world is finding that bacteria is becoming more and more resistant to pharmaceutical antibiotics.

Coconut Oil Is An Antioxidant

Oxidative damage occurs throughout the body as we age and increased levels of oxidation can increase the rate of aging as well as disease.  Antioxidants consumed through diet and supplementation can help to slow this process down.  One study published (September 2013) in the journal Food and Function found that virgin coconut oil as a dietary supplement greatly reduced oxidative stress in liver, heart and kidney tissue.

One of the antioxidant compounds in virgin coconut oil, a polyphenol called ferulic acid is believed to have powerful properties that may even help to repair lung damage due to smoking.  In addition, there is evidence that ferulic acid in coconut oil may help in reducing cancerous tumor size, prevent or slowdown the onset of postmenopausal osteoporosis and there is ongoing research into the possibility of Alzheimer’s  prevention.

For an adult, two to four tablespoonfuls of virgin coconut oil is generally recommended in order to obtain the full antioxidant benefits.

There is some medical  as well as a great deal of anecdotal evidence that daily consumption of virgin coconut oil may increase the libido in both men and women who, as they age may be experiencing a loss of desire in this area.  Presently, the only evidence of testosterone increase while consuming coconut oil is in a medical study involving rats however there is good reason to believe that this same effect may result in men as well.

Because of the nutrition in coconut oil, there is  also a very good possibility that studies will support the anecdotal evidence that adding this food to your diet may help you to increase your libido. Some women have claimed that their energy levels  increased after adding coconut oil and there are some men who have claimed to have had an almost immediate effect (within a few days) of having a much improved libido.

In India, it’s been traditional to practice what is called “Oil Pulling” as a prevention against all kinds of diseases.  The practice involves swishing an oil, generally sesame seed oil, around the mouth and in between the teeth for about ten to twenty minutes  per day. It has been confirmed by studies that this does in fact “pull” bacteria from the mouth including gums, teeth and tongue into the oil.  The oil is then spat out of the mouth and should not be swallowed.

Recently a study was conducted on this traditional practice and it was discovered that coconut oil is a superior oil to use for the practice of oil pulling and indeed when done on a daily basis, a major improvement in oral health was observed.  In subjects that practiced oil pulling, there was also  a reduction in bacteria of the mouth. Other studies indicate that this practice using coconut oil may also reverse gum disease and repair damage while reducing plaque.

In the Ayurvedic tradition, oil pulling is also helpful for:

While further research is needed to confirm the benefits noted above, it is conceivable that if oil pulling is beneficial for oral health, other areas of physical health could also be improved.

While it may seem counter intuitive that adding a fat or oil to your diet can help with weight loss, the fact is that virgin coconut oil can assist with dieting and weight reduction.  The reason for this is because of it’s make up as a Medium Chain Triglyceride (MCT) oil.  The human body does not readily store MCT’s as fat and instead there are several studies that show that consumption of MCT’s helps to burn fat while suppressing appetite.

There is some evidence that the MCT’s in coconut oil can actually increase energy and metabolism.

In addition to weight loss and energy increases, consuming a fat with MCT’s can help other nutrients to be absorbed by the body. Vitamins such as A, D, E and K are fat soluble and therefore require fat in order to be effective.  If you take CoQ10, you should take it with a fat such as coconut oil as it is also fat soluble and will have improved absorption than if no fat is consumed when taking CoQ10.

Which Coconut Oil To Use?

There is absolutely no doubt that the only coconut oil that you should use that which is labeled either “Virgin” or “Extra Virgin.” Processed coconut oil loses much of its health benefits and the majority of studies that show benefits of coconut oil use virgin oil. In addition, a study published in 2004 in Clinical Biochemistry proved that unhydrogenated virgin coconut oil was superior to refined types at reducing LDL’s (bad cholesterol) while increasing HDL (good cholesterol). 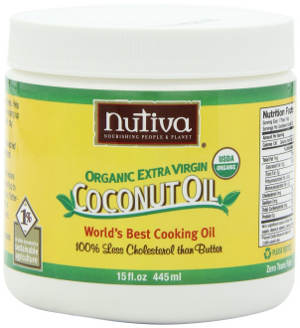 In our opinion, we really like the Nutiva brand of Coconut Oil and the fact that it has a delightful subtle taste along with a pleasant aroma makes it easy to take on it’s own if you don’t want to cook with it.  Nutiva is also certified organic. Cooking with it is straightforward and some doctors recommend that if you are going to cook with any oil, make sure it is coconut oil.

Nutiva is available through Amazon.com here.

Myth Or Fact: Coconut is an effective sunscreen

Equivalence of Lauric Acid and Glycerol Monolaurate as Inhibitors of Signal
Transduction in Staphylococcus aureus. J Bacteriol. 2000 May; 182(9): 2668–2671

Oxidative Damage to Proteins and Lipids During Ageing