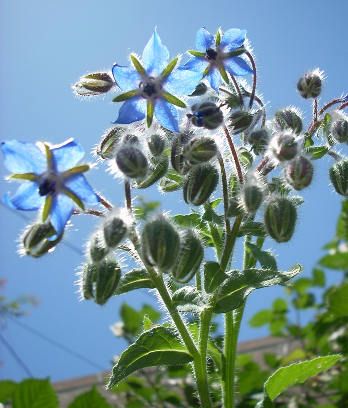 Originating in Syria, the Borage plant now grows wild in most of Europe, North Africa, North America and Britain. It grows between two and three feet and has “furry” stems and leaves.

In some parts of Europe, the leaves which have a cucumber like taste are used in soups and salads while the flowers which have a taste hinting at honey and are very pretty are used to decorate deserts. In Europe, the Borage plant has been used for a variety of maladies and in Iran, tea made from the dried flowers is used to calm anxiety.

There is some information that suggests Borage may be helpful for a variety of ailments, including anxiety, inflamation associated with asthma, Pre-Menstrual Syndrome (PMS),  lung cancer and prostate cancer.  But many are also very excited about the prospects that Borage seed oil may be helpful with rheumatoid arthritis.

Some vegetable gardeners like to plant borage near tomato plants as apparently this may assist in improving the taste of tomatoes nearby.

How Borage Is Used:

The Borage plant is used in a variety of ways:

The oil from the seeds is used to treat a number of conditions,  including PMS, Menopause, Rheumatoid Arthritis, and more.  Borage juice from the leaves as well
as tea made from Borage flowers has been  used to treat anxiety and depression.

A recent scientific study indicates that borage oil may be suitable for liver problems. A study published in the February 23rd, 2012 edition of Phytotherapy Research and headed up by OY Lukivskaya indicated that a supplementation with Borage Oil may reverse ethanol induced liver damage. Their findings suggest that this is due to the antioxidant properties that borage oil has.
Gamma-linolenic acid (GLA) is an Omega 6 fatty acid and is also found in Evening Primrose Oil and Black Currant Seed Oil. Omega 6 fatty acids play a crucial role in many bodily functions including hair growth, maintaining healthy bones while regulating metabolism and assisting with the reproductive system. On top of all this, omega 6 fatty acids are crucial for proper brain function.

The human body does not manufacture omega 6 fatty acids and therefore it must come from the diet. Borage oil is showing promise in a number of areas, including the above mentioned liver support. As well, the School For Exercise Science reported some evidence that borage oil may be helpful in reducing symptoms of rheumatoid arthritis.

Another study conducted by Foster RH, Hardy G, Alany RG of the School of Pharmacy in Auckland, New Zealand indicated that borage oil may be helpful for dermatitis as a topical application. In 2004, the Welsh School of Pharmacology at Cardiff University reported that their findings warranted further investigation into the use of borage oil for women that were at high risk of breast cancer.

So yet again, we can find another of nature’s own medicines and one that is in abundant supply and relatively inexpensive. If you are concerned about your own omega-6 fatty acid intake, borage oil may indeed be a supplement you should consider.