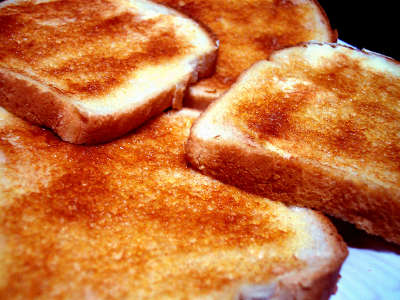 Cinnamon Toast May Be Good For You!

Who doesn’t enjoy the taste of cinnamon? Quite likely, many readers have enjoyed cinnamon toast made in their homes for breakfast or as a tasty snack. Cinnamon buns are one of the most popular selling items at many coffee shops. And who can resist a homemade apple pie with cinnamon baking in the oven? There is just something about both the scent and taste of cinnamon that seems to attract us to it. But how many realize that cinnamon, although not really a “herb,” is a spice that can have some very important health and healing benefits?

There are two types of cinnamon; Cassia (sometimes called “Chinese cinnamon”) and Ceylon cinnamon, which is often referred to as “true cinnamon.” In reality, they both have very similar properties, although cassia cinnamon is stronger tasting and not as sweet as that from Ceylon. In North America, the majority of cinnamon that is sold in grocery stores and used in baking is the cassia form. Ceylon or true cinnamon is more expensive. And as mentioned, cinnamon is not a herb, but is a spice that comes from the bark of a small tree.

Cinnamon has a long history as a spice that has been claimed to have medicinal qualities. In traditional Chinese medicine, cassia cinnamon is used for a number of ailments including menstrual issues such as cramps and pain. As well, it is claimed that it will increase energy and improve circulation.  In Ayurvedic medicine, this spice is used to treat and prevent the cold virus and is also recommended for diabetic conditions.  In the book by John Lust, The Herb Book, the spice is listed as an ingredient that also includes blackberry leaves, milfoil, and raspberry leaves for a tea that is recommended for pregnant women to prevent miscarriage and nausea as well as increasing milk production.

The ancient Israelites were also told to use cassia cinnamon in a “holy oil” used to anoint priests and kings (Exodus 30:22-25).

So, we can see that cinnamon certainly has a long history and reputation for some important health benefits. How does that reputation stack up against actual scientific evidence? You just might be surprised!

In 2003, a study was published in Diabetes Care, a peer reviewed medical journal which shows evidence of the ability of cinnamon to help regulate and improve blood glucose. The results surprised many (Study published here). Sixty individuals were involved and divided into several groups including a group that was administered a placebo. Overall, the participants who received a daily supplement of cinnamon of a minimum of 1 gram per day saw their blood glucose levels reduced by 18 – 29%. In addition to this benefit, other benefits were seen including a reduction in LDL (bad cholesterol) and triglycerides.  While total cholesterol was reduced, HDL (good cholesterol) was not affected negatively.

While some have debated the results of the study that was conducted in 2003, the Mayo Clinic reports that another study done in 2009 also suggests that cinnamon supplementation may be helpful for those with Type 2 Diabetes.

Cinnamon For The Immune System

While there is no cure for the common cold, we do know that there are some foods, herbs and supplements that show great promise in helping to prevent cold or flu like viruses from taking hold. And if they have taken hold, there is a good chance that these foods may help to reduce the effects and decrease the length of time that one suffers from the virus. Cinnamon is one of those herbs or spices that may indeed be helpful to take while being inflicted with a cold or flu virus. It certainly does have antioxidant characteristics and is rated high on the ORAC scale. ORAC, or Oxygen Radical Absorbency Capacity scale was created by the United States Department of Agriculture to help standardize certain claims that are being made about a variety of herbs, supplements and compounds.  Expressed this way, cinnamon’s ORAC value is 131,420 μ mol TE/100g.

It’s been reported that people who have worked in cinnamon factories, especially during the very serious outbreak of the Spanish flu in 1918, appeared to be immune to the virus.

In 2009, a study was published in the Biorganic & Medicinal Chemistry journal which shows that cinnamon has a role in reducing rheumatoid arthritis symptoms and pain. Cinnamon appears to slow the rate of arthritic damage while also helping to reduce bone damage.

Studies have shown that cinnamon can have a positive affect on brain function, and this can come about simply by smelling it. There are reports of increased memory when the spice is regularly used.  It also shows anti-mold properties and could be used in breads to give a longer shelf life, while also being used to ward off yeast infections.  It has also shown to kill off e. coli bacteria in fruit juices.

Obviously, there is something to be said for the respect that ancient healers had for cinnamon.  So go ahead and indulge in cinnamon! Try using it in different ways as well, in order to increase your consumption of it. How about adding some to your morning coffee or chocolate milk? Use it to spice up a variety of dishes when cooking or baking. Cinnamon is an important part of the Indian spice blend known as Gara Masala, which is used in many dishes.

For many of us, cinnamon laced foods are a “comfort food” and we now know there is a lot more to it than that! If its only benefit were to help you ward off colds and flu viruses, that alone would help you to maintain that “Healthy, Happy, Beautiful” attitude!