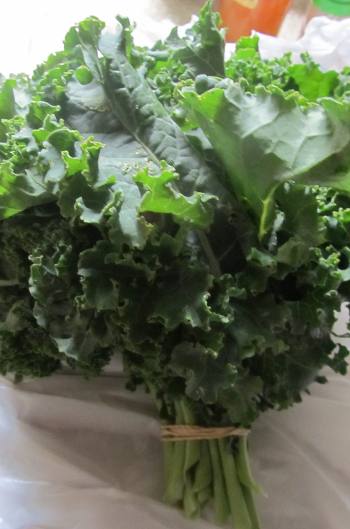 A large bunch of kale purchased at a Farmer’s Market.

Recently, kale has become very popular among health food conscious people with some grocery stores reporting an increase in sales of over 400%. As various celebrities and popular television personalities have promoted kale as a superfood, literally tons of the vegetable have been sold and consumed throughout Europe and North America.  Indeed, there is good reason for this member of the Brassica family to be so popular as a health food. It contains many vitamins and nutrients and may well be a major cancer prevention vegetable when eaten on a regular basis.

There are several different cultivars of kale that have been known to mankind for thousands of years. It is perhaps one of the first vegetables that was cultivated and there are references to it in literature that goes as far back as the Ancient Greeks. Because of it’s hardiness and that it can be grown in cold climates right into the winter season, it has been valued as a food vegetable throughout the world.  Some suggest that in the time period known as the middle ages, kale was the most consumed vegetable throughout Europe, having been brought there either by the Celts or Romans.

It was brought to North America in the 19th century, first to Canada and then was introduced into the United States.  For a time, it was seen more as a valuable food for cattle and farm animals before it saw it’s recent rise in popularity as a health food with amazing benefits due to it being a nutritional powerhouse.  It is also one of the best leafy vegetables for storage and will stay fresh in the fridge for considerably longer than other leafy vegetables although much of it’s nutritional value is best the sooner it is eaten after harvesting.

As already mentioned, many people view kale as a super food and are incorporating it into their daily diet. It is for very good reason as kale is packed with vitamins, minerals and other healthy compounds. According to the USDA, one cup of chopped kale contains 10 important minerals and 15 different Vitamins and vitamin compounds.  One of the major vitamins in kale is Vitamin K and a one cup serving provides over 600% of its recommended daily allowance (RDA) of this vitamin.

In addition, kale is very high in Vitamin C with each one cup serving up 41 mg of this antioxidant vitamin. Kale is also an excellent source of Folate, Vitamin A and Beta Carotene. Together with these vitamins, the vegetable is rich in minerals that include Calcium, Magnesium, Phosphorous and Potassium with trace amounts of other important minerals. Adults who do not get enough potassium in their diet would be well advised to add a serving of kale regularly as it provides 228 mg in a serving, although other potassium rich foods should also be consumed.

Vitamin K is a vitamin which many people do not get enough of and perhaps are not even aware of its existence.  It is extremely important however, and deficiencies can lead to heart disease, artery calcification, osteoporosis, dementia, and tooth decay. There is also evidence that a diet lacking in sufficient Vitamin K can also lead to a weakened immune system and cause you to be more susceptible to other diseases including pneumonia, the common cold and the flu.

If you want to maintain healthy Vitamin K levels (deficiency in this vitamin is quite widespread), then increasing your kale consumption is highly recommended.

Studies show that eating a diet rich in kale could be one of the most important weapons against developing a variety of cancers and may also help to slow down the increase in size of tumors. In addition to it’s rich nutritional value in vitamins and minerals, it has a very high level of other antioxidants including carotenoids and flavenoids.  Flavenoids are pigments found in plants and have extremely high antioxidant values that offer protection against a wide range of conditions. Kale’s flavenoids include kaempferol and quercitin there are many others as well.

Kaempferol has been associated with lower risks of bladder, lung and pancreatic cancers as well as reduced indicents of heart disease when those eat foods with a high value of this flavenoid.

Because of the high number of vitamins and minerals found in the vegetable, it is also reportedly a wonderful food for maintaining healthy skin.  If you have damaged skin, the antioxidants that are found in kale may help your body to heal and reverse the damage.

Because of it’s high Vitamin K content, consuming lots of kale may decrease the incidence of varicose veins as well as repairing damage to blood vessels. For this reason, a higher consumption may also improve the skin around the eyes and decreasing those dark circles many of us get.  Research also shows that wrinkles caused by aging may be decreased with a diet that includes foods high in Vitamin K as research shows it can help the skin retain elasticity.

There are so many benefits to eating kale on a regular basis, so let’s make a list of them.  (In addition, we’d love to know the experiences you have found when you added or increased kale in your diet – please tell  us in the comments below).

How To Consume Kail

There are many ways you can increase the amount of this leafy green (and sometimes purple) vegetable.  Many people eat it after it’s been cooked by boiling or steaming while others prefer to eat it raw.  One of the problems with boiling kail before consuming it is that you will destroy some of the nutrients it contains such as the Vitamin C. Steaming kail does not appear to have the same nutrient destruction as boiling it does. Cooking it can increase some of the availability of nutrients over eating it raw.

If you are going to eat it raw in order to obtain the highest potential of the nutrients that are present, it is often suggested to chop it finely. Raw kale can be tough to chew, but it is important to ensure higher digestibility that occurs when the vegetable is broken down by thorough chewing or light steaming. Because of this, many people prefer to consume their raw kale blended into a smoothie.  The action of the blender blades help to ensure the raw leaf is broken down into much smaller bits which make it easier for our digestive systems to extract and use the valuable nutrition it contains.

Another potential problem with eating raw kale is that it does contain oxalic acid which can prevent the absorption of calcium. Steaming or cooking kale will break down the oxalic acid if you are concerned, however many health authorities suggest that the amount of oxalic acid in kale and other leafy vegatables is too low to be concerned about. You may however want to consume your other calcium rich foods separately from when you consume your kale.

WebMD: The Truth About Kale.