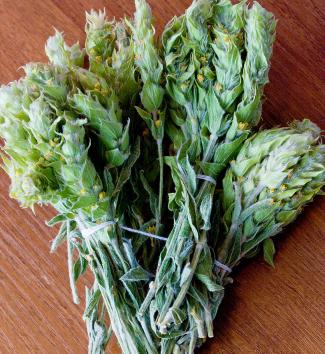 For centuries, inhabitants of Greece have been drinking a tea made from the flowers and stalks of a plant that grows in the mountains, and sometimes called Mountain Tea. While there are several distinct species including Sideritis scardica (which grows on Mount Olympus and has been the subject of most scientific inquiry) and Sideritis purpurea, they are also locally known as “Shepherd’s Tea,” and “Ironwort,” and in Greece it is called “Tsai Tou VouNou.” It has long been believed that drinking a tea made from this plant had beneficial properties for good health, and there is scientific evidence to support those claims.

Traditionally, it’s been used to relieve respiratory infections and coughs including those caused by colds, and has been used to also prevent such infections. As well, Mountain Tea is used to relieve stomach and digestive problems. The plant only grows at an elevation above 3,000 feet and shepherds used to gather it up while tending their sheep in the mountainous regions. Hippocrates, who is often considered the father of modern medicine, wrote about Mountain Tea and it’s health benefits while praising it for it’s ability to heal the body when brewed with hot water. This shows us just how long this beverage has been used as both a health tonic and medicine as Hippocrates was born in the 5th century BC.

So what makes the tea brewed from the flowers, leaves and stems of this plant so amazing for good health?

The small yellow flowers, leaves and stems of Sideritis are rich in oils and compounds which are known antioxidants. One of these is called kaempherol – a flavenoid with very powerful properties. It has been studied and results indicate that it can be beneficial for a wide range of illnesses (including their prevention) such as leukemia, breast cancer, diabetes and even lung cancer. Presently, this flavenoid is being considered on it’s own as a possible treatment for a variety of cancers.

Other compounds with high antioxidant properties in Sideritis include aglycones, chlorogenic acid (cancer preventing compound), verbascoside (anti-inflammatory and antimicrobial), and many others have also been identified.

Hippocrates recognized that sipping Mountain Tea had a positive effect on anxiety and depression, and again, scientific research is bearing this out to be a true fact. A paper published in the peer reviewed journal Molecules in April 2015 discussed a study in which four flavenoids (xanthomicrol (1), isoscutellarein 7-O-[6”’-O-acetyl-β-D-allopyranosyl-(1→2)]-β-D-glucopyranoside (2), isoscutellarein 7-O-[6”’-O-acetyl-β-D-allopyranosyl-(1→2)]-6”-O-acetyl-β-D-glucopyranoside (3) and salvigenin) found in Mountain Tea were shown to have an effect on inhibiting hMAO in the human brain.

Higher levels of hMAO in the brain are associated with several conditions including anxiety, depression, Alzheimer’s and Parkinson’s Disease. In other words, regular consumption of Mountain Tea could help you prevent mental illnesses related to aging while also helping others that have mood disorders not related or specific to any age. If you suffer from anxiety and/or depression, this tea, regularly consumed, may have beneficial effects for you.

There are some references in older literature that suggests regular consumption of Mountain or Shepherd’s Tea can also have beneficial effects on libido. While there has been little, if any, scientific research in this area, it is quite possible that some of the anecdotal evidence may be correct.

With a high content of the minerals potassium and zinc, both of which are necessary for good health including sexual health, drinking this beverage may also help with mineral balance. Additionally, with the anti-anxiety and antidepressant qualities, regular consumption may have an ability to help you “get in the mood” that is more difficult when you are feeling depressed or anxious.

How To Make The Tea

Making Mountain Tea is pretty simple. For one serving, add a small handful of the herb to water in a saucepan and bring to a boil. While many other teas are made by pouring boiling water over the tea leaves or herbs, many suggest that bringing the water to a boil with the herb from the start is preferred with this type of tea. 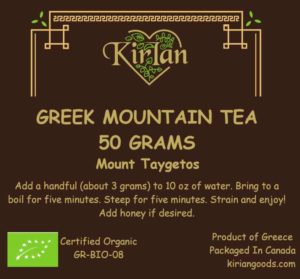 The tea can be drank as is, although some people enjoy adding a bit of lemon juice and/or honey.

Where To Get Greek Mountain Tea

Probably the best place to get this herb is in the mountains of Greece. However, if you want to enjoy its benefits including cancer prevention (and possibly also cancer treatment), as a cold and cough remedy, and its mood-enhancing properties but don’t live in Greece, it can be difficult to locate in neighborhood grocery stores. Some larger ones that have an “international section” may carry it, but it’s likely that ordering it online will be the easiest way to obtain it.

Our research indicates that the KirIan brand (available here) is perhaps the highest quality. Not only is it organic, the owners of this company have driven around Greece to compare various producers and their methods so that you can be assured that your getting the best quality Sideritis available (and it tastes great!).