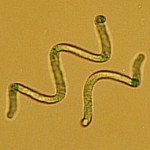 First born on this planet more than 3.5 billion years ago, Spirulina (also called blue-green algae) is one of the first life forms to have evolved on earth. Scientists believe that organisms like spirulina oxygenated our atmosphere, making life possible for all higher organisms.

Spirulina has a long history of being used as a food source. Earliest documented evidence shows that it was used as long ago as 10,000 years, though actual use could be even further back than that. The Aztecs used it in Mexico, as did indigenous African populations.

In fact, it was a botanist in Chad studying a traditional green, dry bread made from Spirulina that first brought the organism to the international stage in 1963. Since then, millions of people worldwide have taken the algae as a food supplement with great effects.

The United Nations and the World Health Organization recognize the value of this small organism, and have labeled it a ‘complete food’ because it contains so many of the essential nutrients for good nutrition.

Spirulina has 10 times the amount of carotene as carrots and 60 times that of spinach. It is rich in natural Essential Fatty Acids, and is a very good source of Vitamins B1, B2, B3, B6, B9, C, D and E. Spirulina is also rich in minerals like iron, calcium, phosphorus and potassium.

The high iron content makes spirulina ideal for dealing with iron deficiencies in pregnant women and children. Spirulina contains 580-1800 mg/km of iron compared to whole cereals, which are considered one of the best sources of iron which contain only 150-250 mg/kg.

The calcium and magnesium content of spirulina are comparable to those found in milk, making it an ideal supplement for those on a dairy-free diet.

Spirulina contains high levels of B vitamins which help in the metabolism of sugars (B1) and the creation of insulin (B6). A study in the Journal of Medicinal Food in 2001 found that spirolina was helpful in controlling blood glucose levels and in improving the lipid profile of patients with type 2 diabetes.

Recent American studies have found that the anti-inflammatory effects of spirulina may protect from – and reduce the effects of – some neurodegenerative diseases such as Parkinson’s Disease,  and Alzheimer’s Disease.

There is anecdotal evidence that spirulina supplements can be used in weight loss regimens as well. Taking the supplement an hour before meals is said to suppress the appetite as the proteins expand and absorb water, preventing overeating.

You can buy dried powdered spirulina at health food stores which you can mix with water or add to smoothies, sprinkle on salads, or mix with dips and sauces. If used in cooking, add it near the end of preparation so it is exposed to as little heat as possible for maximum health benefits. Most people consume spirulina in pill form as a dietary supplement. A standard dose is between 10 and 20 mg per day, but there is no upper limit. Taking higher doses has not been shown to have any ill effects.