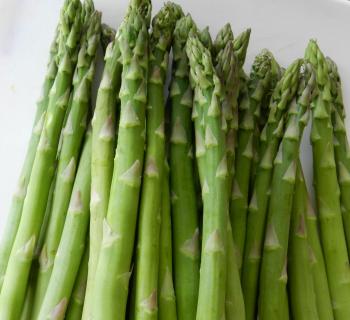 Asparagus, a food widely consumed during the spring and early summer months, has so many health benefits that have been known for centuries, that there are even ancient poems written for it. This vegetable has been cultivated and eaten by mankind since at least the days of the ancient Egyptians, who prized asparagus so much that it was offered to their gods. The Greeks and Romans also enjoyed this food and also used it medicinally to treat a variety of illnesses and conditions. In Ayurvedic Medicine, Indian asparagus (called Shatavari) is considered to be useful for many complaints including low libido.

A perennial, it is best consumed when young and tender. If allowed to grow for too long before harvesting, the plant becomes woody and undesirable as a food. The tips of the plant will “fern” outward as it grows and its best to harvest and eat asparagus for ferning. When in its young stage, it is a powerhouse of nutrition, and can be eaten raw or gently cooked. There are a number of ways to prepare asparagus that are delicious and nutritious.

In fact, asparagus is a food that has one of the most balanced mineral and vitamin profiles and is also packed full of antioxidants. Let’s take a more detailed look at why you might want to consider adding more asparagus to your diet:

This amazing vegetable contains a long list of vitamins and minerals and regular consumption of asparagus will help to keep your body at good levels. It is low in calories (approximately 20 per half cup serving). But while being low in calories, its nutritionally dense.

Many of us do not get enough of the major B-Vitamins in our diet, but adding asparagus could help you improve that. It is especially high in folate, with a one cup serving providing 67% of the RDA! Additionally, it is also a very good source of Vitamins B1, B2, B3 and B6.

Vitamin K is another very important vitamin to the human body which aids in blood clotting as well as many other functions. 1 cup of asparagus will give you 101% of the recommended daily allowance of this vitamin. It’s also a good source of Vitamins A, C and E.

The mineral content is also excellent and is a wonderful source of some very important trace minerals including chromium, manganese, copper, and selenium. You’ll also get about 8% of your RDA of magnesium, 10% of zinc, and 6% of calcium by consuming a cup of asparagus.

But this vegetable doesn’t stop there! In addition to having an excellent vitamin and mineral profile, it is also packed with other antioxidants that may have cancer preventative qualities, including glutathione (GSH). It also has excellent levels of sarsasapogenin, a known anti-inflammatory which may also be useful in the prevention of ALS or Lou Gehrig’s Disease.

High asparagus consumption may also help to prevent cold and flu like infections.

Is Asparagus An Aphrodisiac?

For centuries, asparagus has been considered to have aphrodisiac properties and has been suggested to those (both men and women) suffering with low libido. There are no known scientific studies at this time to make this claim, however there is plenty of anecdotal evidence to suggest there may be some truth to this. However, it should be cautioned that many plants that have been thought to have libido boosting properties through the ages are because of their shape or appearance in being similar to male or female reproductive organs.

Therefore, any libido enhancement that is offered by asparagus may also be psychological rather than physical. The belief that it will help may be enough for those who are feeling fatigued or need an energy boost. On the other hand, it’s excellent vitamin and mineral content may also have fatigue busting properties, especially as asparagus is so well balanced, and includes a wide range. Vitamin E is known to be helpful in oxygen transport in the blood and zinc is known to be important to normal levels of libido.

No matter what, eating lots of asparagus will also help maintain good heart health and circulation, both of which are important for sexual health.

Recently, there has been widespread interest in the idea that asparagus may have cancer curing properties. This has come about due to many people receiving a “chain email” that suggests that an article appeared in 1979 in Cancer News Journal entitled, “Asparagus For Cancer.” However, no such article can be found and the email or story also refers to a Richard R. Vensal, D.D.S. None of this information has been authenticated, and the claims are that people with Hodgkins Disease and other cancers have been completely cured by taking a daily regimen of asparagus and/or asparagus paste over a period of time.

It is true that asparagus contains some special compounds that are both anti-oxidant and anti-inflammatory, and which it is believed can be useful in cancer prevention. There have been some studies done with asparagus extracts on rats that had cancer and the results were encouraging, but this research is still in its very early stages.

One thing we do know though is that eating high amounts of this vegetable is very good for you! And with it’s anti-inflammatory and anti-oxidant compounds including glutathione, eating asparagus regularly may have a preventative role in some cancers.

It is not well understood why, but some people who eat asparagus detect an odd or unpleasant odor in their urine, sometimes as quickly as 15 minutes after consumption. Others however, don’t detect any such odor, but it’s not really known if those who do detect it are able to due to higher sensitive related to smell. It is possible that everyone who eats asparagus will also have compounds in their urine that cause the odor, which include sulfites and other substances, but that not everyone is able to detect it.

At one time, some physicians believed that this odor was a sign that asparagus was harmful to kidney function, but there is nothing to suggest that this is true, and the odor is simply caused by sulfites or other compounds (perhaps in combination) that are excreted in urine. So, there is nothing to worry about if you do detect a different odor after consuming asparagus.

Asparagus can be enjoyed in any number of ways, including raw (in salads), sauteed, grilled, baked and gently heated in water. It does not need to be cooked for very long and doing so may make it less nutritious and less enjoyable. Many people enjoy it with a splash of lemon juice, or cooked lightly with olive oil and minced garlic.

It’s also popular with some as a main ingredient in soups.

Care should be taken to avoid allowing asparagus to dry out after being purchased. It is best consumed as fresh as possible, and if you do need to keep it for a few days before eating, the bottom of the stems should be in water, while the rest is covered to avoid dehydrating in the fridge.