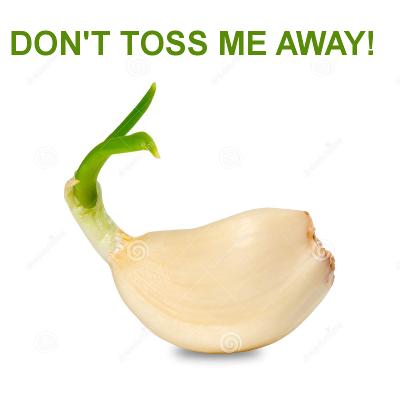 You may already know that garlic is considered a superfood by many, with health benefits that have been proven through scientific study over many years. It is perhaps one of the healthiest foods for the many benefits it offers.

If you happen to purchase garlic in bulk like we do (sometimes, we'll pick up ten pound bags of garlic bulbs at harvest time), you may have so much of it that by the time you could around to using the last ones up, some of the garlic may have sprouted.

We've seen several myths that eating garlic that has sprouted is bad for you, and this, of course, is nonsense. It may have a slightly different taste, perhaps on the bitter side if it's been sprouting for several days, but as far as health benefits, it may even have more benefits than non-sprouted garlic!

A paper in The Journal of Agricultural and Food Chemistry reported on a study that was conducted at the School of Food Science and Biotechnology in South Korea. The scientists involved in the original study wanted to know if sprouted garlic contained different levels of phytochemicals that improve health.

What the researchers discovered was that garlic that had sprouted for five days had a considerably higher level of antioxidants than raw unsprouted garlic. They concluded that "sprouting may be a useful way to improve the antioxidant potential of garlic."

There are many people who believe that sprouted seeds such as those in the legume and bean family, cereals including wheat, rice, and barley, and even many other seeds will increase the nutritional value. This is because sprouting can reduce the level of lectins in the seeds, which have anti-nutritional properties and can decrease absorption of important nutrients.

This study, however, showed that sprouted garlic actually had higher levels of antioxidants than in it's raw unsprouted form. We know that it is possible that fermented foods also have an increased nutritional profile, with the fermentation process actually creating B-Vitamins - and fermented garlic is easy to make at home and is a good way to preserve it.

So, if you are interested in the health benefits of garlic, be sure to not toss away any that have sprouted! Eat those garlic cloves up!